1.What exactly is a fart?

Flatulence—which occurs in nearly all living organisms—is a mixture of hydrogen, nitrogen, oxygen, carbon dioxide, sulfur dioxide, and in some cases, methane. These gases are produced as the byproduct of the trillions of bacteria that break down food during the digestive process. (source)

2. Can farts be measured?

Yes, indeed, they can—using a “rectal catheter,” researchers are able to shove a tube up a patient’s poop chute to determine the volume of gas that is produced during the sacred act of farting. (source)

Farts exit the anus and enter the world at a speed of 10 feet per second, or slightly less than seven miles per hour. (source)

4. Members of a South American tribe greet one another by farting.

Sure, there’s a certain breed of male idiot who thinks it’s funny to fart in front of others, and to be fair, women don’t tend to be afflicted with that special strain of sadism. But before they start getting all high and mighty, they should realize that female farts have a higher hydrogen sulfide concentration than male ones and thus, fart-for-fart, they’re smellier than dude farts. (source)

Not only was the infamous Nazi dictator a speed freak, he also suffered from hepatitis and gastrointestinal cramps, which led to a condition of chronic flatulence for which he took 28 different medications. It is almost certain that no one complained to Hitler about the smell. (source)

7. You fart enough every day to fill a balloon.

The average human toots about 700ml of flatus daily—enough to blow up a birthday balloon! (source)

If you tend to emit farts that are as loud as a Metallica concert, this only means that you don’t have a wide-open, sloppy anus that would let you rip ’em much more silently. So go ahead and be embarrassed that you fart so loudly, but also take some pride in the fact that your anus is tight. (source)

9. “Professional Fart Smeller” is a job in China

These smart fellers make up to $50,000 a year by diagnosing digestive illnesses merely through the scent of the patient’s flatulence. (source)

10. Dogs love the smell of farts Although you probably blame Man’s Best Friend when you fart in front of company, your dog will never blame you for farting—that’s because they adore the aroma of flatulence and will even poke their snout in your ass to get a better whiff. (source)

11. Some beetles fart to attract mates.

No, I’m not talking about John, Paul, George, and Ringo—I refer instead to the female Southern Pine Beetle, who rips pheromone-laden farts to attract male suitors. (source)

12. Nearly half of all women have farted during sex 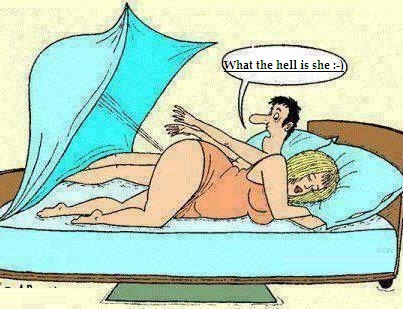 According to a study at the University of California San Francisco-East Bay, 43% of women surveyed reported that they’d experienced “flatal incontinence” within the previous three months, although this did not deter them from having sex. (source)

Some Interesting random Questions and their answers. Part 1